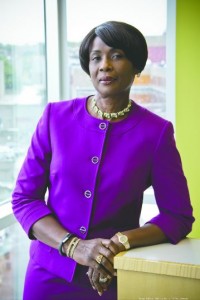 Frederica M. Williams, President and CEO of Whittier Street Health Care Center (Whittier) since 2002, has transformed a basic community health care center into a neighborhood centerpiece and national model.  Her keen vision has positioned Whittier as a leader in urban health care with a crucial focus on the importance of culturally competent healthcare and social services for diverse populations.

With a deep commitment to embracing Boston’s multicultural richness and to empowering people to participate fully in their physical, mental, social and economic uplift and that of their community, Williams takes the health of Boston’s neediest residents to heart.  She is highly engaged in supporting improvements in the health of diverse populations living in Massachusetts as well as eliminating health and social disparities among immigrants, refugees and minorities. She is an advocate extraordinaire and a compassionate and caring leader who is deeply committed to improving the lives of vulnerable residents of Boston.

Under Williams’ direction, Whittier has embarked upon ambitious community outreach campaigns, taking quality health care and social services to patients rather than waiting for patients to arrive at their door. Whether hosting New England’s largest men’s health summit, making health care practitioners available at local houses of worship, or providing the homeless and residents of public housing with on-site access to health screenings, Whittier relentlessly engages its neighborhood, encouraging healthy lifestyles and paving the way for better health. This fervor to better the community’s health is cultivated from the top, beginning with Williams.

In addition to fostering an environment of proactive health care and energizing a community, Williams has brought sound financial stewardship to Whittier.  As such, she is ensuring that the services and resources offered by Whittier will be available for generations to come. She brings much-needed business acumen to her daily work. Since Williams began at Whittier, the number of people served increased from 5,000 to 30,000 in 2015 and her vision is to serve 40,000 by 2020. Under her leadership, Whittier built its first permanent 80,000 sq. ft. medical home in its 80 year history of serving Boston’s residents. This new LEED certified, state-of-the-art health and wellness center will provide the much needed capacity for Whittier to provide up to 220,000 clinic visits annually and to continue to expand its innovative medical and public health services. In 2015, Whittier opened a Wellness Institute comprised of a state-of –the-art Fitness Club (Gym) and Community Garden to address the high rates of obesity and related chronic diseases due to physical fitness, nutrition and stress. In 2017, Whittier opened a satellite clinic and full service pharmacy on Blue Hill Ave, Roxbury, Massachusetts. In July 2018, the Whittier Street Health Center Board of Directors voted to name Whittier Street Health Center’s state-of-the art building the FREDERICA M. WILLIAMS BUILDING in recognition of Williams’ tireless efforts and selfless commitment to the communities served by Whittier.

She attended the London School of Accountancy, passed the examinations of the Institute of Chartered Secretaries and Financial Administrators, United Kingdom, and was elected fellow of the Institute.  She obtained a graduate certificate in Administration and Management from the Harvard University Extension School and a Master in Business Administration with a concentration in Finance from Anna Maria College in Paxton, Mass. She passed the exams of the Institute of Administrative Management (United Kingdom) with distinction and has participated in several Executive Education programs at the Harvard University Business School. She is also a fellow of the National Association of Corporate Directors.

She is the recipient of numerous awards and recognition including the Women Business Magazine’s Top 10 Heroes Award and the UMass Boston’s Robert Quinn Award in 2008. The WMJX-106.7FM’s Exceptional Women in Healthcare Award in 2009.  In 2010, she received the Massachusetts League of Community Health Center’s Outstanding Massachusetts Health Center Executive Director Award, the Boston Business Journal’s Health Champion Award for Community Outreach and the Community Leadership Award from the Mayor’s Office of New Bostonian. In 2011 she received the Pinnacle Award by the Women’s Network of the Boston Chamber of Commerce and an award from the Network Journal in New York as one of the 25 Influential Black Women in Business. In 2012, she was received an award from the White House Communications Agency for her exceptional community service. In 2015 and 2016, she was named by the Boston Business Journal as one of the Power 50 Bostonians, Leader transforming real estate in Boston, and a Woman of Influence. In addition, under her leadership, Whittier has been named one of the top 100 Women Led Businesses in Massachusetts by the Commonwealth Institute and Boston Globe.

Williams also finds time to serve others in her community as a member of the Board of Trustees for the Dana Farber Cancer Institute, the Massachusetts League of Community Health Centers, and the Boston Health Net.  She is a member of the International Women’s Forum, Massachusetts Women’s Forum, Women Business Leaders of the U.S. Health Care Industry Foundation, a Fellow of the National Association of Corporate Directors, and is an Independent Director of Eversource, NYSE (ES, parent company of NStar), the largest utility system in New England.

Whittier At A Glance

On April 13th, 2020, Whittier Street Health Center launched a walk-up/drive thru COVID-19 Testing Site outside our main clinic on 1290 Tremont Street, Roxbury. We