Message from the Whittier Street Health Center Board of Directors 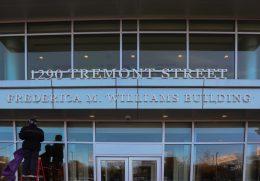 Message from the Board of Directors:

The Whittier Street Health Center is pleased to name its building after its President & CEO, Frederica Matilda V. Williams

On November 14th, 2018, the Whittier Street Health hosted a naming and dedication event to celebrate the naming of its building – Frederica M. Williams Building.

Frederica M. Williams has been the President & CEO of Whittier Street Health Center since 2002. During her tenure she has partnered with our dedicated staff to provide holistic programs and service to save, improve and transform the lives of the patients served.

Under Ms. Williams’ leadership, our center has moved from a leased space on 1125 Tremont Street to our first permanent home on 1290 Tremont Street, Roxbury. This transition has not been without its challenges. The total cost for the construction of the building was $37 million, and the road to its completion was fraught with difficulties. The entire project took ten years and involved complex negotiations during the worst economic time to raise private funding, lease buy-outs, gain new market tax credits, foster individual support, and secure stimulus funding.

Ms. Williams led these key negotiations and strategized with various hospital partners including the Dana Farber Cancer Institute and the Brigham and Women’s Hospital. She also arranged a lease buy-out from Northeastern University, bargained with the city of Boston and strategically negotiated with the late Mayor Menino and three other land developers for the parcel of land where the building is now located.

As a testament to how effective Ms. Williams’ negotiations were, it is worth noting that none of the three other developers involved back in 2003 have managed to start their building projects, as of 2018. Once the parcel was acquired, the construction project itself was no less of a challenge. While Ms. Williams led the design team, working closely with architect Fernando Domenach to design a healing, welcoming and nurturing wellness center and patient centered medical home.

The road to completion was a bumpy road along the way, it seemed as if fates had planned one disaster after another. Just six weeks prior to the scheduled completion date, the building suffered water damage from a major flood on all five floors and five months after repairs, a bus plowed into the building causing extensive damage. None of this was able to stop the construction progress, Ms. Williams pushed forward with repairs and persevered.

The building was completed within 14 months and $640,000 under budget.

Whittier Street Health Center has flourished in its six years on Tremont Street: In 2015, Ms. Williams built a 6,600 sq. ft. gym in the lower level of the building to provide a place to work-out for patients and staff. In the same year, she opened a Community Garden on the premises to serve as a focal point for patients to congregate and learn about planting, growing and harvesting fresh, healthy foods, and, in response to growing demand in Dorchester, Ms. Williams opened a satellite clinic on Blue Hill Avenue in 2017.

Today, in addition to serving as a beacon of hope for 30,000 people, Whittier Street Health Center also provides 28,000 annual visits to community residents. In October 2018, Ms. Williams arranged for the center to open a food pantry to address rampant food insecurity in the community and in November 2018 she opened a Mobile Health Van to provide services to the homeless across Boston, and in particular in the areas worst affected by the recent opioid epidemic.

The story of how Whittier Street Health Center has been shaped and led by Ms. Williams is a shining example of how one person with tenacity, passion and determination to do good can do so, against many odds, achieve an astounding result and provide health benefits that Boston’s underserved communities will be reaping for generations to come.

As we celebrate Thanksgiving, the Whittier Board and Staff are thankful to be of service to our patients and clients, and grateful for the support of our donors and friends. Thank you for your support!

With gratitude and appreciation!