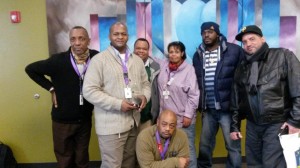 Whittier Street Health Center’s Project Me program was the awarded Take the Test Boston’s Outstanding Outreach Team Award earlier today, Friday, January 9, 2015. Project Me conducts a Rapid HIV testing throughout the city to allow for easy access to those in the community.

Take The Test Boston is an initiative to increase HIV testing in communities of color as a response to National HIV/AIDS awareness. The initiative is focused on bringing the clinical setting directly to the communities of diverse populations.Take the Test Boston takes place each year during the month of June and celebrated their third anniversary this past June 2014. Several Boston-area agencies participated in Take The Test Boston, including Dimock Health Center, Fenway Health, Multicultural Aids Coalition, Mattapan Community Health Center,  ABCD,  AIDS Action Committee of Massachusetts, Boston GLASS,  Urban League of Eastern Massachusetts and STEPRox Recovery Support Center.

Congratulations to Project Me!